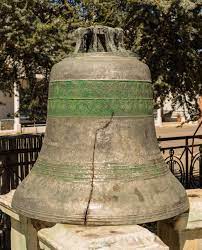 In this piece, I demonstrate a contemplation method of starting with a teaching that catches the mind – perhaps by being intriguing, beautiful, or irritating – and unfolding it through other suttas, daily life occurrences, and meditative experience. A picture is built up from these connected elements until it feels whole in a certain way.

Any conclusions that arise may be useful, but are not final; the Dharma does not afford final conclusions. Nonetheless, one might consider that we are creating resonances among the teachings and our outer and inner life, such that some pattern of tension, resolution, and harmony emerges. You will see that this auditory metaphor is particularly apt for this case.

Let’s begin with this verse from the Dhammapada:

Dhp 134:
If, like a broken bell,
You do not reverberate,
Then you have attained Nirvana
And no hostility is found in you.

Likening an awakened person to a broken bell is surely one of the more unusual similes for such an exalted state.

The two key ideas are non-reverberation and non-hostility. It seems that hostility generates a certain kind of harmful reverberation, which is cut off in an awakened person.

The verse before this one fills out some additional meaning:

Dhp 133:
Do not speak harshly to anyone;
What you say will be said back to you.
Hostile speech is painful
And you will meet with retaliation.

Now it is clear why the broken bell is a positive image: Its non-resonance is the alternative to the escalating back-and-forth that hostile speech can produce. Interestingly, it is one’s own harsh speech that is implicated when one is hearing such words from another – we are only receiving back what we have put out into the world. Choosing not to continue the flow of hostility, we terminate this energy as a broken bell absorbs the strike without ringing.

On two occasions in the past year, I have been approached by a person who remembered an encounter with me from many years ago when they felt hurt or misunderstood. Although I only recalled one of the encounters, in both cases, I simply received their words. One person was respectful and the other not. Regardless of their stance, I knew intuitively that the back-and-forth would stop with me.

Here we have praise added to blame as something a sage does not react to. It seems that we might reverberate inappropriately in response to positive as well as negative words. We might take in praise and re-transmit conceit, for instance.

Some suttas talk more explicitly about the practice aspect of receiving others’ words. For those of us who are still walking the path, some indication of direction could be helpful.

Sn (Suttanipāta) 3.11 features silence as a conscious practice to be done by one intent on freedom. Fools are said to be noisy, clattering through their lives, which is likened to being a “half-filled pot.” In contrast, the sage is like a “filled-up lake” with no room for echoing. This is a more positive image than a broken bell, but the effect is similar.

Is non-reverberation the only, or even the highest, option?

In SN (Samyutta Nikāya) 11.5, Sakka, the leader of the devas, speaks the famous line, “Not returning anger with anger, one wins a battle hard to win.” The context is that Sakka is debating with another god, who claims that it is better to respond harshly to anger so that one’s opponent won’t think that one is capitulating out of fear. Sakka instead counsels “practicing patient endurance” and “mindfully maintaining one’s peace.” It might feel like an internal “battle” not to retaliate, but this is the practice. In the sutta, Sakka wins the debate by being on the side of freedom from conflict.

SN 11.5 does not specifically say that one should be silent. Perhaps it is possible to respond with gentle speech or simple wisdom – anything other than a harsh response. Thus, if we do respond, it is on a different (perhaps “higher” or “more beneficial”) wavelength.

In MN 36, the Buddha is conversing with a brahmin named Saccaka, who treats him disrespectfully. The Buddha calmly continues to teach, prompting Saccaka to say, “It is wonderful, it is marvelous how when Master Gotama is spoken to offensively again and again, assailed by discourteous courses of speech, the color of his skin brightens and the color of his face clears, as is to be expected of one who is fully accomplished and enlightened.” The Buddha did not need to undergo an internal “battle” to remain unfazed and indeed to brighten. For him, it seems there is no response on the angry wavelength, and a full response on a beneficial wavelength.

I recall a time on retreat when mindfulness was quite strong and continuous, and painful memories surfaced for an extended period. Far from disrupting the balance of the mind, these painful feelings evoked joy – I was delighted to be meeting them with such strong mindfulness. Although certainly not “fully accomplished and enlightened,” I knew intuitively that the heart was being deeply purified by being able to see that pain so non-reactively. Perhaps it is not so fantastical that the Buddha could “brighten” in the face of offensive words.

And perhaps there is a link here to compassion. Although the most well-known word translated as compassion is karuna, there is another one: anukampa. This word means “to shake with” – not like the foolish echo of a “half-filled pot,” but like a deep, full resonance that senses the signal and creates a beneficial overtone.

Practice changes how we take in, resonate with, and respond to various inputs. As the heart and mind strengthen, there is less and less response on the frequencies of greed, hatred, and delusion, and correspondingly more and more response on “higher” frequencies like compassion – we sense dukkha and “upshift” our response toward wanting to alleviate it. And as we become more attuned to these beneficial frequencies, we can directly resonate with the goodness of the world, such as by feeling appreciative joy for another’s success or being inspired by the good qualities of others. Numerous suttas talk of listeners “delighting in” the words of the Buddha, or wise beings “rejoicing in each other’s good words” (e.g., MN 24).

One practice that specifically leads toward this kind of “wise resonance” is mindfulness of the body. In MN 119, the Discourse on Mindfulness of the Body, the Buddha says that an undeveloped mind is subject to Māra (ie, harmful influences) as easily as a mound of wet clay is penetrated by a heavy stone ball. In contrast, after developing mindfulness of the body, the mind is as impenetrable to Māra as a heavy wooden door to a light ball of string.

Among the benefits of this practice named in the sutta: Conquering fear and dread, being able to endure “ill-spoken, unwelcome words,” and easily resting in subtle states of concentration. So, practice gives the mind the strength and fine-tuning it needs to become a proper resonance cavity: As dead as a broken bell to harsh speech and fear, but supple and responsive on “higher” levels such as concentration. (Compassion is another such higher level).

As the mind develops along these lines, perhaps one’s experience shifts like this: At first, we are readily pierced by angry words and strike back in kind. Then we practice consciously with silence, patience, and “mindfully maintaining peace” – choosing these even though they are sometimes effortful to choose. Later, we see right through the angry words to the suffering of the other that must be occurring beneath them – and that suffering is what we respond to with compassion. Maybe the compassion takes the form of silence, or maybe gentleness, or maybe action. The conditions of the moment will tell.

With no hostility in one’s heart, there can be no resonance with hostility received from others – like that broken bell. We have re-tuned our whole being to respond only on beneficial frequencies. Let freedom ring. 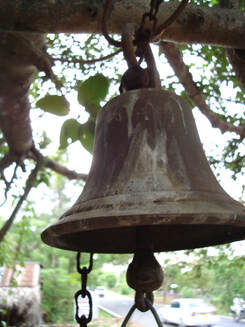