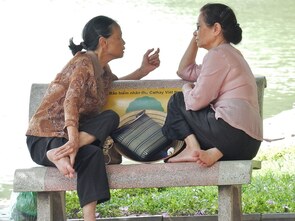 In a sutta that is rather remarkable for its applicability across time, the Buddha teaches on what makes a person “competent to hold a discussion” (Bhikkhu Sujato’s translation), “fit to talk” (Bhikkhu Bodhi), or “fit to talk with” (Bhikkhu Thanissaro). These phrases are not meant pejoratively; for many centuries, people have been considering how to engage skillfully in human discourse, and fortunately, wise teachers have discerned some general ways that work. We can learn and practice them.

First, it is important to remember that we train our own minds first. The language of this sutta makes it easy to fall into judging the competence or fitness of others. But the suttas are meant to help us cultivate skills that we can bring to the world; far less good comes from using the teachings to evaluate others. Even in relational skills, we train to be able to “do our part,” regardless of whether others follow suit. We can rest assured that doing our part is actually one of the best ways to encourage others to do so as well.

As noted in the sutta (AN 3.67), “You can know whether or not a person is competent to hold a discussion by seeing how they take part in a discussion.” This is an invitation to watch our own mind. The Buddha then offers five areas of training: Four based on how we respond to a question, and one related to the supporting conditions in the mind during a fruitful discussion. He traces back toward the inner mindstates that pertain to good conversation.

When asked a question, people display various mental and emotional responses. For the Buddha, both the content and the manner of response matter. At the top level, a question should be answered in an appropriate way: If it requires a straightforward categorical response such as yes or no, one should respond this way. And similarly if it requires a more analytical / explanatory response, or requires further information (counterquestioning of the asker), or is poorly framed and should be set aside.

Once I was asked quite simply if I was available to offer some help. I launched into a long explanation about my time commitments and upcoming schedule, when in fact all that was asked for was “yes” or “no.” It was my own inner entanglement with desire, reluctance, and guilt that made my response so complicated. So, the first area of training is to know what kind of response is appropriate and be able to bring it forth, free from inner entanglement.

This issue of inner entanglement affects all the areas of training. The second training area relates to being consistent or “standing firm.” Although this could be interpreted as holding a fixed view or doggedly sticking to our point, the rest of the sutta indicates that it means something more nuanced. We are asked to be consistent not only about what we say, but also in what we propose, in speaking from what we know, and in the general dialogue process. So, we don’t switch tacks in the middle of our argument, or try to revise the rules of the discussion partway through, or first claim one thing and then another about our aim. Consistency relates to both clarity and respect.

The third and fourth areas of training bring in the emotional realm. The Buddha criticizes evasiveness, diverting to an irrelevant topic, or displaying annoyance, hate, and bitterness. In contemporary language, we might say such reactions signal defensiveness and perhaps a subconscious knowing that one’s position is untenable, unwholesome, or weak. Next, the Buddha claims that a person is not competent to hold a discussion if they “intimidate, crush, mock, or seize on trivial mistakes.” This represents an aggressive form of defensiveness. Entangled in our emotional concerns, we cannot hold a mature discussion.

In these first four areas, the Buddha links competence simply to avoiding all the negative mental and emotional reactions. But in the fifth area of training, he begins to offer positive qualities by introducing the notion of a supporting condition or even a prerequisite. The state of our mind is what underlies the ability to respond well to questions, both mentally and emotionally. Interestingly, the first such supportive quality is listening well. At the very least, a person must be able to lend an ear to what is actually said.

I have been amazed at instances where I incorrectly read something the first time (reading is form of “hearing”). I have received emails that I scanned quickly, felt some emotional response and decided to wait to reply – only to go back the next day, reread it carefully, and discover that it said something very different than I first thought. If it’s true in writing, how much more so in spoken conversation? This provides ample motivation to listen attentively.

Further supporting conditions for fruitful discussion involve wisdom. People with some knowledge of the distinction between wholesome and unwholesome, and also the of nature of suffering, its arising, and its cessation, are said to be in a much better position to converse well. Not only can they participate beneficially – they may actually realize liberation. In a sudden pointing toward the goal, the Buddha reveals that this teaching is not simply about winning debates or improving relations with one’s neighbor, but about freeing the heart.

In the final verse that sums up the teaching, it says,

Those who converse with hostility,
too sure of themselves, arrogant,
ignoble, attacking virtues,
they look for flaws in each other.

They rejoice together when their opponent
speaks poorly and makes a mistake,
becoming confused and defeated--
but the noble ones don’t discuss like this.

[…]  Knowing when the time is right,
neither hostile nor arrogant.
Not over-excited,
contemptuous, or aggressive, […]

Good people consult
for the sake of knowledge and clarity.


The quality of the public discourse today is quite poor. Although it is tempting to bemoan this at great length or to identify particular individuals who have contributed to the decline, acting in line with this sutta suggests beginning by improving our own method of listening and conversing, and perhaps finding like-minded people with whom to train in the skills noted above.

Because competence in discussion involves reducing inner entanglements of the mind and heart, it is very much part of the spiritual path. We can humbly acknowledge that we still need practice and also see that others are simply acting in line with their degree of inner entanglement and level of practice. Let us continue to offer the best we can to this world and our fellow beings.