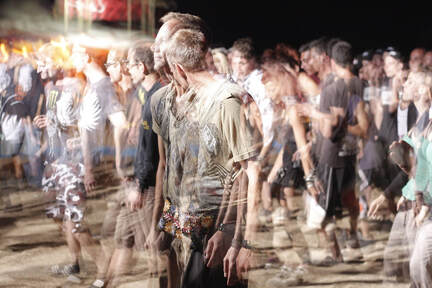 Explorations Toward Anatta
​
In Buddhist practice, we are asked to look clearly and carefully at experience. We are given guidance on what to notice, such as its continual change and its dependence on a variety of conditions. A simple act of hearing is hardly constant for an instant, and depends on a functioning ear, a sound, and attention to that sound.

Some experiences seem to be less straightforward. Looking clearly and carefully, what do we see in ourself? We are told that a key characteristic is anatta, usually translated as not-self or sometimes non-self. An external sound is not you, but you may still have an idea about what you are. The Buddha states directly that grasping any view of self leads to affliction (MN 22.23-25), but what is the alternative? And how do you know if you’re “grasping”?

The teaching of anatta is quite subtle. Often our approach to such refined qualities and insights proceeds in an iterative fashion, going a bit too far in some direction, then correcting, then refining down to a deeper understanding. With ongoing attentiveness, there is a honing in, a settling toward, and an eventual arrival (which may look different than expected).

Once we start to see and feel the limitations of our personal “self,” the heart begins to try out other options. This is the beginning of a beautiful movement toward freedom. Along the way, however, there is a tendency to believe in these other options – to take them on as views, such that we would be willing to assert their “truth.” Although they differ from the ordinary notion of a separate, real self, they nonetheless need further refinement. They approximate an understanding of not-self, but still fall in the realm of views.

To be clear, each one has its beauty and benefit – they are all improvements on self-centeredness and self-focus, and they may cultivate certain helpful qualities of the mind or heart. Nonetheless, when done with mindfulness and an aim of walking the path to full liberation, these views will eventually be seen through and no longer believed as “how it is.”

One approach to moving out of the personal realm is to observe nature in the external world. We see how things change, how other beings live and die, and we become aware that there are large patterns at work in the weather, climate, evolution, and even the life cycle of stars. We are small indeed. In our culture, it is easy to take on the scientific worldview that subsumes the self into the physical Universe. This view says: Humans are special, aware animals that evolved on a planet orbiting an ordinary star in a nondescript part of a spiral galaxy amidst a vast cosmos of swirling particles bound by impersonal physical laws. Wondrously, the brain has evolved consciousness, giving us a sense of our life, and we play out our part briefly on the stage of a larger universal flow. The self is not real simply because all of life is, at some level, only “chemicals.”

This expansive view provides relief from our personal struggles and engenders much equanimity. But at some point we realize that we cannot achieve not-self by simply defining the self away. Also, asserting that the mind is solely derived from matter is a view that should be checked more carefully. We will have to go deeper than this.

Another common approach is to become part of a group. We give up our singular identity for a collective one, acting in solidarity with others, subordinating our interests to a larger vision. We learn how to create something larger than any of us could do on our own, proving by our actions that the whole is more than the sum of the parts. This is an elevated view from which good can come. It may cultivate mature emotions and other Dharma qualities, and may bring about benefit in the world.

​But if we do not have wisdom, we will easily shift into identifying with the group. In one version, we see our community or tribe as being “people of like mind” with whom we belong. In another version, we define ourselves in contrast to others – we are an oppressed but noble group that struggles righteously. Subtly, we have endowed the group or organization with real existence. “We” has become a larger form of “me.” In the end, the same insight that reveals the insubstantiality of the self also reveals the insubstantiality of the collective.

Treading further, we may distinguish a small “self” from a larger “Self,” regarding the former as an illusion but the latter as true. Our little sense of self comes from the delusion of separation, which is healed through the realization that we are actually a drop from the great ocean of being. This general idea takes many forms, some secular and some religious. In a common version, the aim becomes union with this cosmic Mind, the enduring achievement of non-dual “Oneness.” Profound experiences of this type do occur among humans and are worthy of regard as spiritually significant. But making this enigmatic Self into an existing entity oversteps the empirical knowing on which Buddhist practice is based.

As noted, all of these forms express elevated human qualities. Enlightened people may well join in collective beneficial efforts or serve others with no sense of separation – but they would do so without believing in an associated doctrine. The trouble in each case above is the creation of a fixed notion that “this is how it is” or the substitution of some other “real” entity in place of the personal self. We so much want somewhere to land.

Anatta is subtle indeed. What is the final, “ultimate” understanding of this quality? Perhaps it is found in the slight smile of the Buddha, who does not define himself, but says only that he is “thus” (tādi). Recall from the beginning: In the teachings, we are asked to continually examine change and conditionality. I have found this to be an excellent instruction.