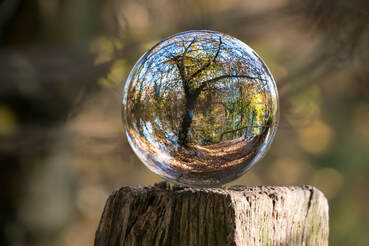 The other day, I caught a line offered by a media pundit: “The first rule of ‘spin’ is to get ahead of the game and frame the story in advance.” People with different interests get into an ever-escalating game of controlling the language, view, and story of our world.

Practitioners know that this game is much more intimate than politics. Our mind contains a thicket of conditioning – some recent and some ancient – that affects our immediate experience and also shapes our future experience. We are full of “inner spin.” We call this conditioning the sankhāras, often translated as “formations,” “fabrications,” or “preparations,” or the more descriptive “volitional formations” or “karmic formations.” They arise directly out of ignorance (not seeing clearly), and precede sensory contact: They literally do frame the story in advance.

These ideas are captured in the teachings on dependent arising. The beginning of the sequence of twelve interrelated mental events (which end in “suffering”) goes like this:

This can be understood from our own experience, without going into technical details on these terms. A simple example is that when I am shopping for a shirt in a clothing store, I will see the shirts and will ignore the belts and pants, perhaps not even noticing them. My interest in (desire for) a shirt “colors” and narrows my vision. A deeper example is that when I am caught up in irritation, I tend to see what is unpleasant about a situation, not noticing what is beautiful or beneficial. The distortion of aversion colors my whole experience, and if I unmindfully act on that, I will create further aversion in my future experience. Some sankhāras go very deep, all the way to evolutionary patterns of survival.

We are not such innocent observers of the world. We are participants, even before we take in information about our surroundings. The external and the internal, the past and the present, are intertwined in ways that are not so easy to see. The good news is that meditation practice, both on the cushion and in the world, is a gradual training in seeing how the mind shapes experience and making wiser choices about how to do it.

As Kathleen Dowling Singh notes in Unbinding, a book with many everyday examples of dependent arising, “Karmic formations function to overlay the past on the present. Under the cover of ignorance, [they] take the arising of each present moment and impress their old and fixed proclivities on freshness.”

We don’t have pundits in Buddhism, but we could have “pandits”: Pandita is the Pāli word for wise or intelligent, and it is indeed a cognate of the English word pundit. A pandit would say that part of the task of practice is to see the sankhāras in operation. If this seeing is deep and clear enough, it overrides the ignorance at the root of that sankhāra, and the mind frees itself from the influence of that pattern.

Here are some tips on practicing with sankhāras. First, it is important to keep the mind anchored in the present moment. Even if we are revisiting the moment when a karmic formation was formed – some event in the past – we know that we are doing so from the perspective of now. A friend who was practicing with an unexplained sense of aversion to a coworker suddenly saw the face of a childhood teacher she disliked, whom the coworker resembled. Rather than rush back into memories, she had the wherewithal to calmly stay present until the tangle between the past and the present dissolved.

More often, it will not be so clear. We may be called simply to watch the mind repeatedly react and entangle itself, or to “sit in the mess” of multiple views and emotions that are swirling around a situation. Eventually, we experience that all of these reactions are extra, that the situation does not require them, and some new clarity emerges, perhaps in a surprising way.

The success of this method does require being willing to treat thoughts as not automatically true. A few decades ago, there was a bumper sticker that said, “Don’t believe everything you think.” It’s timeless advice.

Tuning into sankhāras helps us realize how deeply pervasive they are. We come to see how every ordinary experience is shaped by some kind of view, which creates a lens over what we can notice and experience. It’s a huge self-fulfilling loop that is not actually aligned with the fresh arising of each moment. We may begin to wonder if it really possible to experience life in an undistorted way.

When we act ethically – with a mind attuned to non-harming – we can notice that it is easier to have clear attention. Conversely, when we are lying, stealing, plotting revenge, or otherwise creating harm, there is a literal darkening or wavering of attention. Gathering the mind into a coherent state through meditation also brings a clear, sharp quality to attention. It is important that this is founded on an ethical basis; not all forms of focusing the mind are wholesome. And the four heart qualities of goodwill, compassion, empathetic joy, and equanimity foster a deeper and clearer engagement with experience, with less entanglement than our usual emotional reactions provide.

In a way, we slowly change the “inner spin” to come from a wholesome perspective. Although it’s still spin, it is the type of spin that supports insight, the cutting-through of these karmic patterns that limit the mind. This will happen naturally as the mind becomes clearer, lighter, more balanced, and more aligned.

The most frequent and insistent sankhāra in the mind is the construction of an “I.” Assuming I exist as a separate entity, there are suddenly things for me to want, acquire, hate, and love. It is fascinating to see the sankhāra of the self, the very process of forming the “I” or the concept that the self possesses things (the “mine”). One time on retreat, I was doing walking meditation in the parking lot behind a row of several cars. I had no thought about the cars when I chose that spot. After some time, a memory arose of when I drove into the retreat center many days earlier. I had parked in that row! Suddenly, “my” car emerged out of the row as a distinct entity. My mind wrapped itself around this special car in a way that literally felt like a twist being applied to perception. It wasn’t there, and then it was. (If I had looked even more deeply, I could have seen the construction of the idea of “car” itself, which is made up of perceptions of shadows and colors in a particular shape that I have learned to label as “car.” Basic perceptions are the precursors of formations).

Formations are not a problem when we see them clearly. It’s fine to know what a car is, and to know which car is yours – in fact, it’s very useful at certain times. Similarly, there is no problem in using the word “I”; even the Buddha did so. But we know experientially that this does not refer to an innately existing thing. It is a functional construction in the mind. As we come to understand this, we have more choice about how to respond to our experience, and we will prefer to do so with love, wisdom, compassion, and other skillful means. There isn’t much point in self-centeredness once we know the self is not in the center.

The political pundit described a competition to frame the story about the world in an advantageous way. Internally, we don’t “win” the game of framing our experience by finally discovering the perfect view, the right story, the best karmic formations that will trump all others. The Buddha offered something more radical: Stop playing the game. We are left with the freedom to create what is needed in each moment or to create nothing at all.